Beams produced by ArcelorMittal Europe – Long Products’ mill of Differdange have been used to build a new bridge in Tegucigalpa, the capital of Honduras.

HISTAR® an efficient and cost-effective solution for bridges

The new bridge on boulevard Fuerzas Armadas in Tegucigalpa is now an advantage for the inhabitants of the sector, giving more fluidity to the traffic and allowing people living in the area to leave in about 5 minutes – contrary to the 30 minutes it used to take.

HISTAR®460 / A913 grade 65 was selected for this project thanks to its many advantages:

Construction of the bridge started in May 2018 and ended in July 2019, with a 100m length structure made with HISTAR® girders.

A partnership between ArcelorMittal International and SOGESA (a Honduran local steel distributor) was capable of bringing the first HISTAR®460 / A913 Grade 65 solution to the region. The project named "Paso a desnivel bulevar Fuerzas Armadas-Metromall", consists in building a new bridge along the road connecting two important points of the Honduran capital, as part of a bundle of measures aiming to reduce traffic problems that have been harming the city for a long time.   The alliance between ArcelorMittal International and SOGESA went through different actions such as promoting A913 to local design companies and steel fabricators, setting the stage for the high strength hot rolled steel solution to succeed. In addition, they managed to get the final decision-takers (Tegucigalpa City Hall) on board with a fruitful round of discussions on how a steel solution can be effective in infrastructure projects, showing them the benefits of a HISTAR® solution. 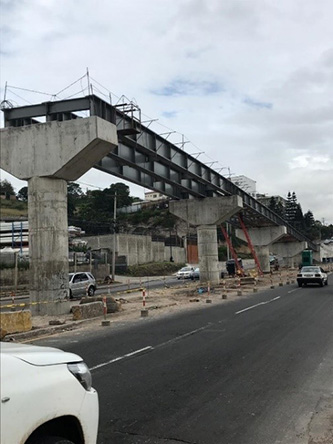