With a length of 560 km, the Moselle is a major European waterway, crossing France, Luxembourg and Germany. It was built in 2019-2020 with beams from ArcelorMittal Europe – Long Products assembled in box girders entirely prefabricated by Steligence® Fabrication Centre in Luxembourg.

Safer and more efficient accesses on the river

Built in 1942, the old bridge located in Tonnoy, France, was deteriorated and was no longer in line with the latest standards regarding mobility. With this new 92-metre bridge, user safety will increase thanks to a new footbridge dedicated exclusively to pedestrians and cyclists and a wider road for vehicles traffic. The bridge will also limit the impacts in the Moselle riverbed and ensure better hydraulic flow thanks to the presence of three pillars instead of four.

S460M: the key advantage to win this bridge project
Early September 2019, construction of the Tonnoy bridge welcomed a huge step: the delivery on site and the installation of the box girders. The girders, fabricated and painted by Steligence® Fabrication Centre, are composed of 24 beams in grade S460M produced in ArcelorMittal Europe – Long Products' mill in Differdange. They measure between 30.5m et 35.4m and weigh a total of 187 tonnes.

The use of S460M structural steel grade allowed for weight reduction, which was a competitive advantage in this project – initially supposed to be completely built with concrete. Thanks to ArcelorMittal steel, construction time and costs were considerably reduced, as there was no need for formwork, sanding, welding or confinement. 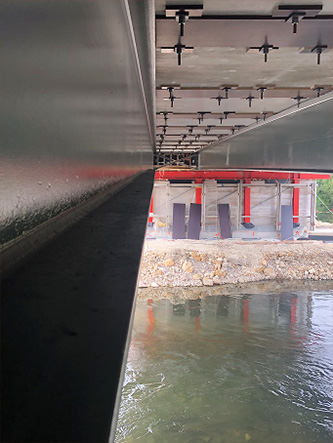